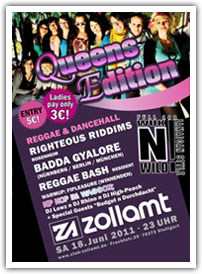 After last year’s great success at the Streetlife Festival in Munich Badda Gyalore is once more guest on the latin stage on Leopold street. On Saturday, June 4th Jara, Steffi and I will be performing 4 times alongside Glockwork Posse – at 6:40pm, 8:15pm and at the after show party starting 10:55pm. Besides that the Latin Arena Reggae Festival offers concerts by artists such as Ray Darwin, Marlene Johnson or Fyah T. Two weeks later, on June 18th we move on to the west and will be visiting Stuttgart. Within Wuk’N’Wild’s Queens Edition Jara and I will be holding a dance workshop in the afternoon between 4 and 6pm. Later on you can show your skills at the Zollamt partying longside Righteous Riddims, Badda Gyalore and the resident Reggae Bash – simply Wuk and Wild! For more information on our shows and the workshop feel free to check our Facebook page.