You are here: Home1 / Reggaeville 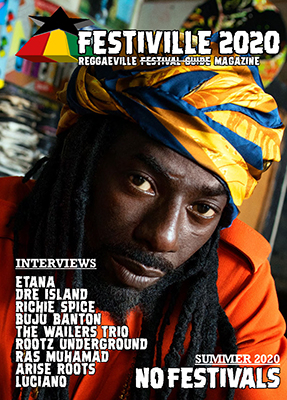 Even though there are not really any major music events taking place throughout this Corona summer of 2020, Reggaeville decided to still publish its digital festival magazine Festiville.

Without events or dates yet ram packed with galleries from past festivals and concerts, reviews and interviews the magazine, that is free to read and download, offers great insights, news and stories about artists such as Richie Spice, Luciano, and Etana. I got the chance to link with Dre Island and no other than the legendary Gargamel Buju Banton to discuss their respective brand new records, as well as the current global situation due to Corona, and their love for Jamaica. Speaking to the Gargamel was surely one of my personal music and professional highlights, and so hopefully is the read of the interview for you all!

Even though he presented several projects in 2019 already the ever productive musical talent Lutan Fyah also dropped another EP in January. Entitled Touch Di Road the longplayer was produced by German Oneness Records and shines with organic Roots music, rich instrumentation, and critical and observant lyrics about different aspects of life and our world in these modern days. For the 54th episode the singer touched di road to visit Wha’ Gwaan Munchy?!? in Kingston to talk about the EP, his inspiration, family, and his daughters. More new albums are also coming from Jah9, The Wailing Trees, and Chezidek, and also Jerone’s new single Give Me A Minute is featured in the recent show.

With his vocally, lyrically, and emotionally touching performances Mortimer was one of the most impressive highlights of this year’s Reggae Month in Jamaica. How the talent turned from cadet to musician, what he enjoys beyond music, and how open he can be with is fans are just some of the aspects he speaks about in the 53rd edition of Wha’ Gwaan Munchy?!?. Spending February in Jamaica the episode also presents live footage from Bob Marley’s 75th earthstrong celebration at 56 Hope Road and the Essence – The Livity Of Reggae show in Kingston.

With his EP Bare Thoughts Devin Di Dakta opened up about some very personal and controversial topics. At Wha’ Gwaan Munchy?!? the 2015 talent competition winner shares his story on suicide thoughts, weakness as a Dancehall artist, and the music business very openly and moving. Additionally the 52nd episode from Kingston, Jamaica takes a look back on 2019 and highlights the most popular album and most viewed video premiere on Reggaeville.

Straight from the 25th edition of the Reggae Jam Festival in Bersenbrueck, Germany comes the 51st episode of Wha’ Gwaan Munchy?!? that welcomes Dancehall artist Busy Signal to talk to him about his latest single releases, the collaboration tune Feel Good he did together with the veterans of Third World for their new album More Work To Be Done, and his own upcoming album Parts Of The Puzzle. More vibes from the festival weekend come through Lila Iké’s amazing live performance, and we reach out to Africa as we highlight the brand new music video from Kenyan Binti Afrika.

In April 2013, we shot the very first episode of Wha’ Gwaan Munchy?!? with Kumar in Dortmund, Germany. The following years we produced shows in places like the snowy Austrian Alps or the blazing Florida heat. We have been invited to the homes of Alborosie and Inner Circle, and we were welcomed at the legendary 56 Hope Road in Kingston by Julian Marley. We filmed at festivals like Afrika Tage in Germany, Rebel Salute in Jamaica, and One Love Sound Fest in Poland. Twice we shot episodes on water: once in a boat on lake Fühlinger with the Jugglerz, and once on the Welcome To Jamrock Reggae Cruise in international waters somewhere between Miami and Montego Bay. We had not only singers but also musicians such as Notis, producers like Rory Stone Love, or comedians Twin of Twins as guests. Some of them like Marcia Griffiths and Christopher Martin joined the show unplanned just by randomly being on the scene, and Ganjaman transformed from camera man into interview guest in Jahcoustix’ episode. We never did a show with a sports personality but had ski hikers, swimmers, and surfers appearing in some. Our most frequent guest was Kabaka Pyramid, the most clicked one Popcaan, and the last thus far Koffee.

After a stunning and energetic performance at Summerjam Festival she joined Wha’ Gwaan Munchy?!? backstage to openly, jovial, and genuinely talk about her personality, the relationship with her mom, and the upcoming debut album. Besides more impressions from Summerjam like Popcaan’s live performance the 50th episode includes more news from Yellowman and his daughter K’reema, and of course we compliment another celebratee: Reggaeville is now 10 years old – on July 1, 2009 the website kicked off! Happy Anniversaries to all of us! Thank you for watching, clicking, reading, liking, sharing, supporting, and loving the music that unites us all!

He just dropped his new album And Then… and then Christopher Martin joined Wha’ Gwaan Munchy?!? to speak about it as well as fatherhood, football and the Reggaeville Easter Special that currently led him to tour with Marcus Gad and Alborosie in Germany and the Netherlands. Besides the singer also The Emeterians and Lee “Scratch” Perry recently released new albums, and Duane Stephenson and Lutan Fyah teamed up for the single Empress Sativa that premiered with a music video on Reggaeville.

Contrary to my regular format entitled Wha’ Gwaan Munchy?!? it was Shaggy who presented his upcoming album by the name of Wah Gwaan?! to me in Kingston and seized the opportunity to also share his experiences at the Grammy Awards, the news about another tour with Sting and insights on his works and collaboration partners.

His musical output is already tremendous: while having the new 15 track album To All My Relations out, Taj Weekes is just about to release another project the single 1.5 Is Still Alive, a communal effort against climate change. At the same time the artist is a UNICEF Champion For Children and runs his charity They Often Cry Outreach to improve the lives of youth in the Caribbean. Yet, the artist still has several records coming up and found the time also to visit Wha’ Gwaan Munchy?!? to talk his works, art, ideas, and precepts. More new releases are presented by The Skints featuring Protoje, Randy Valentine, Runkus and Eesah, and Jahfé who premiere their music video for Warning on 4/20 on Reggaeville. 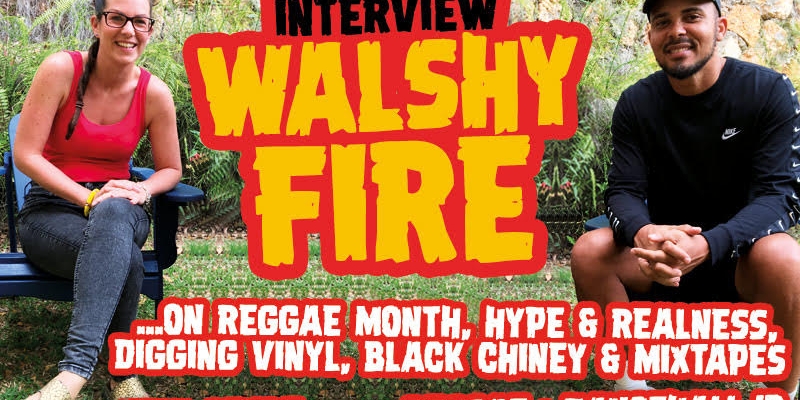 Inviting us to his yard in Kingston, Jamaica, Major Lazer’s Walshy Fire took the time to extensively revisit his personal history from digging vinyl and downloading on floppy disks to the present, his productions with Koffee and Tòke, Reggae Month, and realness and hype.