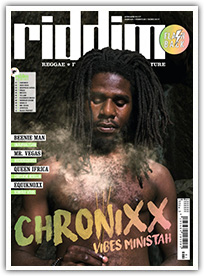 With Hempress Sativa, Xana Romeo, Italee and Queen Ifrica Riddim’s latest issue introduces four strong females, that shine not only with their great musical talent but with sense, knowledge, self-esteem and power. One who knows women quite well and has, according to his lyrics, a million of them, is the King of the Dancehall Beenie Man. He just released his 19th studio album “Unstoppable” and is floating in happiness lately. Where this joy is rooted in is what he told me in an interview for the magazine. Also Chronixx has a lot to reveal about his upcoming debut album “Chronology”, plus the team of editors takes a look back on the past twelve months for the annual Flashback. All these stories and even more are ready for you to read in Riddim #87, that is in stores now or available by subscription.