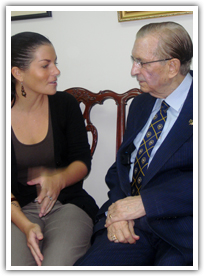 For eight years he was Jamaica’s fifth Prime Minister and led the Jamaican Labour Party for even 30 years, but Edward Philip George Seaga was also music producer and record label pioneer. In a detailed interview he tells about the beginning of reggae, the technical revolution through the transistor radios, and his favourite songs of the past 50 years. Come and join a little time travel on Reggaeville or Youtube.

Old School Reggae In The UK – Documentary
Scroll to top