Blog - Latest News
You are here: Home1 / Riddim Mag2 / Reggae with all its facets in Riddim #80 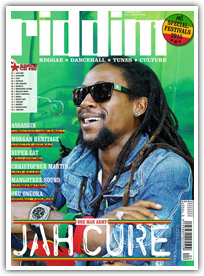 Urban Pop is singer OMI’s very own genre of music, which has led the remix of his single Cheerleader by producer Felix Jaehn to top of the charts in 20 countries around the globe. What his style is all about, what music he loves to listen to himself, and what the fans can expect from the youngster hailing from Clifton ‘Specialist’ Dillons label, are just some of the facts OMI disclosed for the latest issue of Riddim magazine. Mangotree Sound from Nuremberg is open to any genre of Jamaican music from Rocksteady to Dancehall. Fine selections and massive partys are what the sound system stands for since 15 years. Together with the crew I revisited the history and found out how the anniversary will be celebrated. Edition #80 boasts with an intense cultural talk with dub poet Oku Onuora, stunning visuals by artists from the Nanook collective, and an exclusive listening session with Jah Cure for his new album.