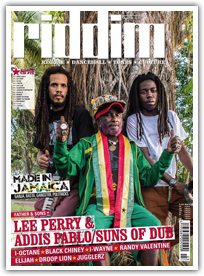 For three month the chief editors set up their office in the Caribbean to create the first issue not just about, but straight from the roots of Reggae music. #73 is intense, thrilling, and diverse just like the island, where it was created. The young Suns Of Dub meet veteran Lee “Scratch” Perry, Vybz Kartel is sentenced while Ganja might be decriminalized, and I-Nation and Edward Seaga express their two perspectives on the “mother of all garrisons” Tivoli Gardens. For the portrait on his model community I joined the latter at a football match in Downtown Kingston – and I stood by the sport meeting German coach of the Reggae Boyz Winnie Schäfer on his way to the world championship in Russia 2018. The Riddim magazine is now available in stores or simply by subscription.