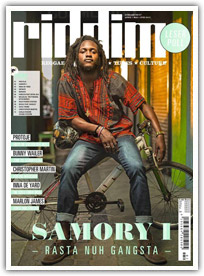 Because she wanted her message of peace, unity and acceptance to reach more people than the congregation, Jamaican singer Kristine Alicia moved from Gosepl to Reggae music. Now she just released her first Roots record, produced by Rory Stone Love, and spoke to me about her works and philosophies for my article in the recent issue 88 of Riddim magazine. As Bunny Wailer is approaching his 70th earthstrong he is building the bridge between music and spirituality and told David Katz about his past as well as his future plans. And cover artist Samory-I reasoned with Ellen Köhlings and Pete Lilly about the release of his upcoming debut and the faith, that made him become the vocalist he is today. All these and many more intriguing stories and articles our now out to get at your news stand or faster and more convenient with a subscription of Riddim.