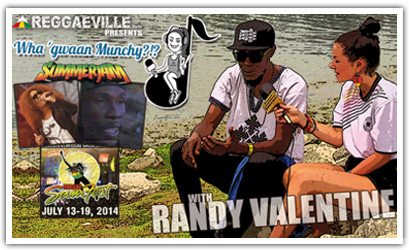 When the latest episode of Wha’ Gwaan Munchy?!? was shot, the German team had not even played the quarter final yet. Nonetheless singer Randy Valentine already knew, who would eventually hold up the World Cup trophy. At Summerjam he did not just tell me, which team he cheers for, but also about his summer tour, the Break The Chain EP and his hobbys besides music. Further we’ve got great impressions from Summerjam for you, as well as an outlook on Reggae Sumfest in Montego Bay and a nice piece of Midnite’s brand new video for Same Boat We. And if that is still not enough, you can watch out for a little musical treat and cameo appreances by more great vocalists.